In his biennial report Tuesday on the Texas judiciary Chief Justice Nathan L. Hecht reckoned with the past year’s unprecedented challenges for the courts and declared: “In the judiciary, we knew this: justice cannot sit out a crisis.”

“Closing the courts was not an option,” Chief Justice Hecht told a virtual audience in a web broadcast. “We could limit operations to emergencies for only a few days. Courts, like everyone else, had to adapt.”

For the most past, Hecht said, courts have kept their dockets current – except for jury trials. “Fewer civil cases, small claims, and traffic cases are pending today than before the pandemic.”

But he said that will change. “You can choose for yourself whether to risk greater exposure to COVID-19, but courts cannot thrust that increased risk on jurors and others who have no choice about appearing in court and would stay away if they could.

“As vaccinations increase, so will the number of jury trials, and soon.” 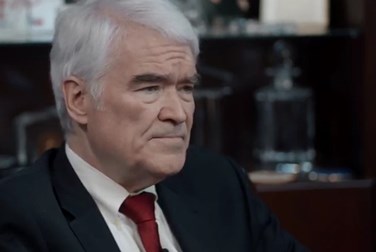 He urged legislative help for familiar needs, many made worse by pandemic effects: legal assistance for the poor, indigent defense and bail reform. And promised a self-examination of racial inequity in Texas court.“We cannot allow access to justice for the very poor to falter just when they need it most. And we can expect that as criminal jury trials resume, the need for funding indigent criminal defense required by the Constitution will also increase,” he said. “I urge the Legislature to fully fund all these needs.”
¶ Bail reform: The vast majority of people in jail are awaiting trial and have not been found guilty. In the past 27 years, the percentage of the Texas county jail population awaiting trial has more than doubled, from around 32% to over 83%. Who pays to keep these defendants in jail? Taxpayers.
He called locking up people “only because they’re poor” wrong and “dangerous to release defendants only because they can afford to make bail.” Hecht proposed what he called a straightforward fix. “First, give courts validated, pretrial, risk-assessment information for all defendants so judges can make better-informed decisions about bail. Second, ask voters to amend the Texas Constitution to allow judges to hold high-risk, potentially violent defendants without bail. Third, provide pretrial supervision for those released. And fourth, collect data to verify that the system is working as it should.”

¶ Garnishment reform. In 1876 when it was drafted, he said, the Texas Constitution exempted basic wages paid by cash or check from seizure by creditors to safeguard their use for basic living expenses. “Today, because payments are often by direct deposit, they do not have the protection our state’s founders believed was important. Threatened seizures of federal stimulus funds paid to cover basic living expenses during the pandemic only called attention to the need to modernize wage protections.
The Judicial Council has proposed an update to the basic constitutional exemption, he said, and cited two pending bills for needed modernization.

¶ Juvenile-justice reform. Children who commit Class C misdemeanors are in the criminal system, not the juvenile system. If a 12-year-old steals a real car, he is adjudicated as a juvenile in the civil-justice system and faces no criminal penalty. But if he steals a $10 toy car from a general store, he is prosecuted in the criminal system for a Class C misdemeanor. This makes no sense. … A child who breaks the law must certainly face the consequences, but the reason for the juvenile justice system is to keep children from being treated as criminals.”

¶ Amidst the pandemic, Hecht said, “we have been reminded, again, that the justice system faces a far worse disease than COVID-19, a disease that is not novel but all too chronic and familiar: the disease of racial prejudice. Outcries last summer charged that the justice system is not fair, and just as importantly, not perceived to be fair. The charges cannot be ignored. They demand self-examination and response from all who serve justice. Texas courts are taking a hard, clear look at themselves, and we will keep doing so. We will gather data to determine how the justice system is working in fact. We will encourage better training of judges. We will work to improve the public trust and confidence in the courts that is absolutely essential to the administration of justice.”