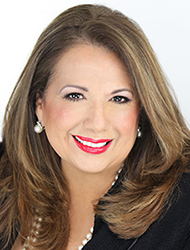 Justice Hinojosa began her legal career as a Reginald Heber Smith Fellow doing public interest litigation for two years in Austin, Texas. Upon completion of the Fellowship, she moved back to South Texas and was a partner at various law firms heading up the firms’ litigation divisions. In 1989, Justice Hinojosa was appointed and subsequently elected Judge of County Court at Law #4, becoming the first woman elected Judge in South Texas and the third Hispanic woman elected Judge in the State of Texas. In 1996, she was elected Judge for the 139th Judicial District Court. She served two terms as District Judge and then stepped down to practice law. In 2016 she was elected Justice of the 13th Court of Appeals, Place 3 and took office on January 1, 2017.

Justice Hinojosa has served as a member and on boards of numerous legal and community organizations. She is especially proud of her work with Texas CASA (Court Appointed Special Advocates), where she served as a member of the State Board of CASA and instrumental in the establishment of CASA in Hidalgo County. By the age of thirty-five she was recognized by Governor Ann Richards for her lifetime commitment to her community by receiving the Governor’s "Back to the People" Award.