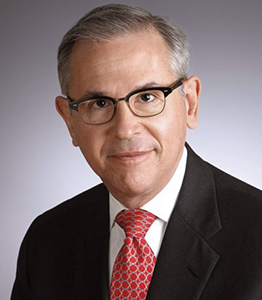 Justice Charles Spain was elected to the court in 2018. He is a native Houstonian and an Eagle Scout.  He graduated from Sharpstown High School, Rice University, and Baylor School of Law.  After law school, he served as a briefing attorney for the Honorable C.L. Ray on the Supreme Court of Texas. He worked at Fulbright & Jaworski and Graves Dougherty Hearon & Moody before working for both the Third and First Courts of Appeals. He has been board certified in Civil Appellate Law by the Texas Board of Legal Specialization since 1993. He was appointed to serve as an associate municipal court judge by Houston Mayor Annise Parker and served in that position until becoming a justice on the court of appeals. He is the first openly LGBTQ appellate judge in Texas.

Justice Spain’s interests include Texas history, the study of flags, and Scouting. He is a co-founder and past chair of the State Bar of Texas LGBT Law Section, which is the first such section of a state bar in the nation.  He is a recipient of the Judge Norman W. Black Award from the State Bar of Texas LGBT Law Section and a recipient of the Texas Award for Historic Preservation from the Texas Historical Commission for establishing standard designs for the state seal and Six Flags of Texas. He has written legislation that has been enacted by both the Texas Legislature and U.S. Congress, including an act to include Martin Luther King, Jr. Day in the U.S. Flag Code. He is proud to be the father of an Eagle Scout and has served as the Scoutmaster of his son’s troop.