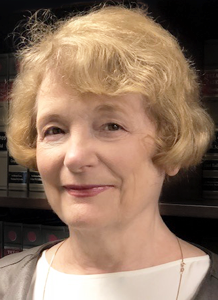 Justice Evelyn V. Keyes was appointed to the First Court of Appeals by Governor Rick Perry in May 2002. She was elected in November 2002 to the remainder of her predecessor's term and re-elected to six-year terms in 2004, 2010, and 2016. Before joining the First Court, Justice Keyes was a partner in Clements, O'Neill, Pierce, Wilson, and Fulkerson, L.L.P., practicing complex civil litigation. She also served as a Special Assistant Attorney General to then Texas Attorney General John Cornyn. She is a founder of the Court’s undergraduate judicial internship program, which is affiliated with the Judicial Practicum program at Rice University.

Justice Keyes received her Doctor of Jurisprudence degree cum laude from the University of Houston Law Center. She was Chief Articles Editor of the Houston Law Review and a member of the Order of the Coif, the Order of the Barons, and Phi Delta Phi and was awarded the Wall Street Journal Award and a Distinguished Service Award. She served as an intern to the Honorable Carolyn R. King, United States Court of Appeals for the Fifth Circuit. She is a former member of the University of Houston Law Alumni Board of Directors and a former and current member of the Law Review Board. In 2014, she was awarded the Law Center’s Public Sector Achievement Award.

Justice Keyes and her husband, David, have four adult children and grandchildren. They are members of St. John the Divine Episcopal Church.