Ty Drury graduated from Baylor Law School in May 2018 and, as so many May law graduates, sat for the July Texas bar exam two months later.

He fell six points shy of passing. His parents say he never cracked a book.

But between graduation and the bar exam Ty Drury battled for his life. Doctors diagnosed his months-long pain as stage-four colon cancer the day before his graduation.

Five months after Ty died last August, his parents got Wednesday for their son what Ty spent three years in law school to get: a law license. Honorary, yes. Posthumously and tragically, yes. After efforts initiated by the Bridgeport lawyer who hired him, the Texas State Bar and the Texas Supreme Court have assured the roster of Texas lawyers bears the name Ty Allan Drury.

In a ceremony in the Supreme Court Courtroom, Chief Justice Nathan L. Hecht, Justice Debra H. Lehrmann, the Court’s liaison to the State Bar, and State Bar Executive Director Trey Apffel III presented James and Sheri Drury of Stephenville an honorary license and bar card for their son. Justices, Ty’s Baylor classmates and his family and his fiancée heard tributes to a law student described as determined but mischievous.

“There is some sadness with this,” Hecht told the Drurys, “but I hope some joy too.”

Wednesday’s presentation, Baylor Law Professor Jim Wren said earlier, was for someone who “wanted to do something that mattered.”

“To know Ty was to know a good ole boy. He was the real deal. This is someone whom people would trust.”

His classmate Bailey Strohmeyer recalled from their first days in the first-year torts course that the professor noted Ty’s lack of preparation in one class – a cardinal sin in law school – and asked him whether the student sitting next to him might have a better analysis. “I remember Ty looking over at me,” she said, “and saying, yeah, I bet she does.”

Baylor Dean Bradley J.B. Toben thanked the Court for honoring Ty. “We are a small school and we take care of everyone,” he said. 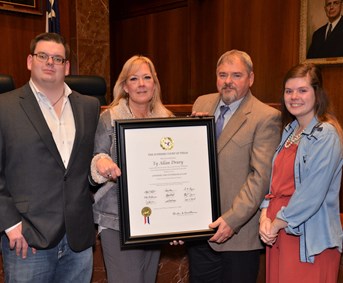 The seed for Wednesday’s ceremony began with Bridgeport attorney Michael A. Simpson, a Baylor graduate who hired Ty to join his personal-injury firm.

In the earlier stages of his treatment, as he traveled between the M.D. Anderson Cancer Center in Houston and Bridgeport, Ty lived with Simpson and his wife and, Simpson said, became like a son. When he would get back to Bridgeport, Simpson said, “he couldn’t wait to get to one of my cases.”

“He very quickly picked up the career that I love,” Simpson said.

Trial law was not in Ty’s plans when he decided to go to law school, his parents said earlier. “He said, ‘I will never be in a courtroom,’’ his mother recalled. “He was born to be there, but he had to find that out for himself.”

Ty Drury was born in Fort Worth, but grew up in the Stephenville area, graduating from Stephenville High School and Tarleton State University. At Tarleton he majored in agriculture science, was on the university’s meat-judging team and was named distinguished graduate in the animal industries department.

He liked problem-solving, his parents said – solving puzzles of all kinds – and employed that in sales as he worked for Saddle Rags Western Apparel, his parents’ store in Stephenville. If a customer had limited money to spend, Ty found a way to sell her what she wanted at a price she could afford.

But law school was another challenge. He almost left the Baylor admission offer on the table because of Baylor’s reputation for training trial lawyers, envisioning instead a legal career in agriculture. But Baylor felt like home when he visited and along his law-school path the people there became like family.

Encouraged to try for the mock-trial team in his second year by its coach, Waco attorney Dave Deaconson, Ty was chosen for the second of Baylor’s two teams. That team won the regional American Association of Justice Student Trial Advocacy Competition in Houston in 2017 and went to the national competition. In the spring of 2018, Ty, then on Baylor’s first team, helped it advance to the national quarterfinals.

On trips for that competition, Deaconson recalled Wednesday, he got to see Ty “in a totally different context,” learning from him how to make boots and how to judge meat.

But in his preparation for the mock-trial competition in 2018 Ty started to suffer mysterious pain. In North Carolina for national competition, Deaconson said Wednesday, Ty held back when his teammates wanted to go out for a break. “He said he had stomach issues,” Deaconson said, “and he was going to stay behind to rest and prepare for the next round.”

A few months later Ty would get his diagnosis.

Despite that, Wren encouraged him to take the bar exam, to see what it involved, to know what to expect when he took the exam after the treatment succeeded. Despite no time to prepare, despite sliding his laptop to a classmate when the classmate’s crashed, Ty came so close to passing the vaunted bar exam, the end game for law students.

I haven’t studied, his parents recall him telling the classmate, and you have a job to go to.

Chemotherapy and a clinical trial worked for a time, but when those procedures stalled his parents took him to Germany for alternative treatment. The cancer had spread. His liver was too involved.

On August 23 last year his brother Zane, seven years younger, wrote on Facebook: “Ty has spent 13 of the last 17 days in the hospital, most of which in ICU. Ty is and always will be a fighter. … However, his liver is reaching a point of no return, and at this point it is causing him more discomfort than whatever benefit he might gain by continuing any form of treatment.’”

Ty Drury died two days later. He was 28. And when the cancer finally won, it took a promising trial lawyer.

His parents and brother survive him and a fiancée, McKenna Skidmore of Stephenville. They were engaged just after his diagnosis, but a wedding would wait until he beat his cancer.

On his headstone his parents had inscribed: Pro Ecclesia, Pro Texana, Pro Familia – for church, for state, for family. The first two elements they borrowed from the Baylor University motto. The last represents his life’s focus.

Wren says Ty left an example for his classmates, maybe for all of us. “It was the realization we’re here to make a difference, to turn on raw determination to fight for people.”

“We are better people, and better attorneys,” Strohmeyer told his parents at the ceremony Wednesday, “because we knew Ty.”