The American Lawyers Alliance is an American Bar Association affiliate that supports law-related education. The Judicial Civic Education Award honors judges for their work promoting civic education in their communities or states. 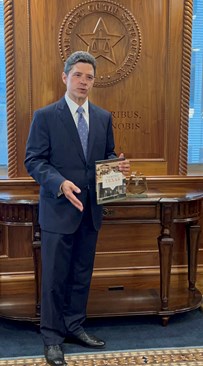 Justice Busby, well-known for his contributions to access-to-justice initiatives, helped to found the Teach Texas program, a judicial civics and court history project that teaches 7th graders about the judicial system. Teach Texas is a partnership between the Texas Supreme Court Historical Society and the Houston Bar Association that uses lesson plans based on the Taming Texas book series. Taming Texas was sponsored by the historical society and created with the help of the State Bar of Texas Law-Related Education program. Tamingtexas.org provides access to the books Taming Texas: How Law and Order Came to the Lone Star State; Taming Texas: Law and the Texas Frontier; and Taming Texas: The Chief Justices of Texas and associated curriculum guides.

Justice Busby is a seventh-generation Texan, third-generation Eagle Scout, and life-long violinist who grew up in Amarillo and Austin. After graduating with high honors from Duke University and Columbia Law School, he served as a law clerk to Justices Byron R. White and John Paul Stevens of the U.S. Supreme Court and to Judge Gerald Bard Tjoflat of the U.S. Court of Appeals for the Eleventh Circuit.

In private practice, Justice Busby represented plaintiffs and defendants in a wide variety of appeals before the U.S. Supreme Court, Supreme Court of Texas, and federal and state appellate courts. He was a partner at the Bracewell firm in Houston and served on Texas’s Fourteenth Court of Appeals for six years before joining the Texas Supreme Court. Justice Busby was appointed to the Court in 2019 by Governor Greg Abbott and confirmed unanimously by the Texas Senate in 2020.