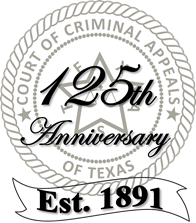 One hundred twenty-five years ago, the Texas Legislature passed Senate Joint Resolution No. 16 calling for amendments to the Texas Constitution to include, among other things, the creation of a court to be known as the "Court of Criminal Appeals," which would have "appellate jurisdiction coextensive with the limits of the State in all criminal cases of whatever grade, …" An election was held at which the people of the State voted to so amend our Constitution; and after the votes had been canvassed, on September 22, 1891, Governor Jim Hogg issued a proclamation declaring that the proposed amendments "have become and are a part of the Constitution of the State of Texas." In recognition of the 125th Anniversary of those events, on September 22, 2016, the Court of Criminal Appeals will be called to order to hear remarks on the history of the Court from the current Presiding Judge and former Presiding Judges of the Court. Members of the Bar and public are invited to attend.