The Mystery of the "Sam Houston" Bible 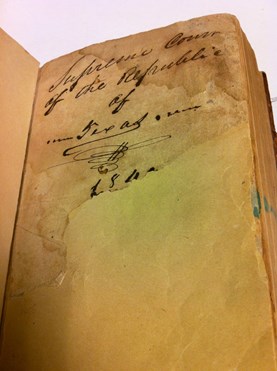 The Chief Justices of the Texas Supreme Court have used a plain, unassuming King James Bible to inaugurate governors and other elected officials for over 150 years. Notable figures of Texas history like the court’s first Chief Justice John Hemphill, Governors James Hogg and Miriam "Ma" Ferguson, and former President George W. Bush have laid their left hand upon it and raised their right, swearing allegiance to our state and its laws. But perhaps the most interesting aspect of the book lies in the mystery of its origin.

The Bible itself — almost pocket-sized, and bound in simple brown sheepskin — has a hand-drawn cross on the back, and an antique Texas Supreme Court seal inked onto on the front. Inside the back cover, two autographs in looping blue ink are still visible. In 1932, two young girls, Lucille Clendenin and Marjorie Ann Easley, playfully inscribed their names while the Bible’s caretakers were distracted by post-inaugural handshaking. The pages are brittle with age and many are water stained, probably a result of the fire which claimed the first Capitol in 1881. Fortunately, the holy book was rescued from the court’s quarters on the second story of the building before its destruction.

Gently opening the Bible to the first page reveals an iron gall ink inscription in an archaic hand which reads "Supreme Court of the Republic of Texas, 184-", followed by an elaborate finial. Unfortunately, the last number in the date is missing. At some point in history, the flyleaf was torn in half, right through the date. Although the Old Testament’s imprint was also torn out, the New Testament has its own title page, which states: "Hartford: Printed by Hudson & Co., 1816”—making the little Bible now over 200 years old.

A well-known but apocryphal legend claims that Sam Houston once owned the Bible, and personally gifted it to the Supreme Court during the Republic Era. According to this legend, the lower half of the flyleaf also once bore Houston’s signature, which was ripped out during a substantial theft of court records. Although there was a major theft of Supreme Court files by a Third Court of Appeals employee in 1972, there is a written reference to the torn flyleaf in a 1937 Associated Press news story, indicating that the mutilation occurred well before 1972. No sources dated prior to 1937 mention any torn pages. A 1953 piece in the Austin American Statesman mentions that on one occasion, “souvenir hunters tore several pages from the book” but claims that they were subsequently recovered and pasted back in when the Bible was re-cased. Given that at least two pages are still missing, it seems possible that these were in fact lost to unscrupulous trophy seekers sometime during the first decades of the 20th century. 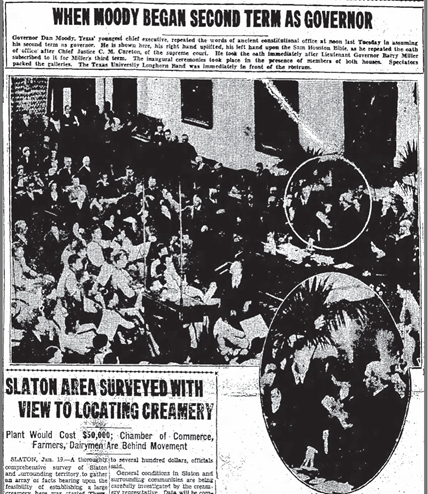 A survey of over 120 years’ worth of sources discussing the book reveals an interesting array of origin stories. The earliest written reference to the Supreme Court’s Bible occurs in an 1893 Austin Daily Statesman article which read: “First of the inaugural party came Dr. Morse, chief clerk of the supreme court, carrying the small Bible always used on these occasions.” Two years later, another story in the Statesman noted that the holy book was used to swear in Sam Houston as Governor in 1859, and John Hemphill as Chief Justice, potentially as early as 1841. Another 1897 article in The Eagle omitted any connection to Houston, and instead surprisingly ascribed provenance to Alamo hero Jim Bowie. The Brownsville Herald stated in 1903: “It is said that every Governor of Texas has been sworn in on this Bible.”

In 1924 the Statesman again wrote: “It is believed this book was used by President Houston at his inauguration in 1841. The handwriting on the leaf greatly resembles Houston’s, according to those who have compared it” and confirmed that the Bible had been in use at inaugurations “for at least the last sixty years.” A similar story was printed in the McKinney Weekly Democrat Gazette in 1927: “The Bible will be the same one used in administering the oath to General Sam Houston when he was inducted into the office of Governor, [and] has been used in inaugural ceremonies since that time.” Two years later, the Abilene Reporter-News mentioned that Governor Dan Moody was sworn in with "his left hand upon the Sam Houston Bible"—interestingly, the only early source to call it that.

In 1941 the Pampa Daily News ascribed the antique handwriting to “the court’s first Chief Justice, John Hemphill” and went on to write: “Where the Bible came from, who presented it to the court—these questions can be answered by no living man for they happened more than a century ago… no one has ever found other records concerning it.”

Nearly all early sources referred to the "Supreme Court Bible" or the "Inaugural Bible” in their articles. Nevertheless, by the end of the 20th century the Houston provenance story had gained the most traction, and the moniker transformed into the “Sam Houston Bible.” The Bible was prominently featured in Governor William Clements’ 1987 inauguration program, which repeated the legends of Houston ownership and the torn, stolen flyleaf. During Governor George W. Bush’s first inaugural address in 1995, he directly described the Bible as "Sam Houston's own, simple and worn.” 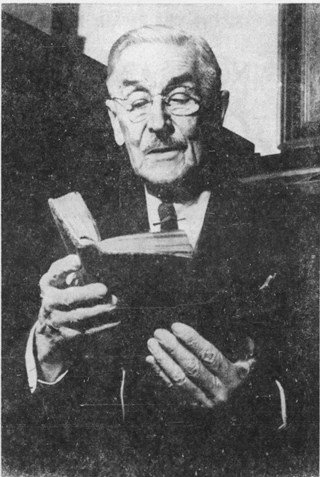 Of course, court officials have attempted to unravel the mystery of the Bible’s origins before. When Deputy Clerk Max Bickler joined the Court’s staff in 1911, a porter told him that the book had been there since he started work at the Capitol just after the Civil War. In 1973 Clerk Garson Jackson told the Statesman: “We guess the [origin] date is 1840, because our earliest court records go back to that date,” but didn’t mention a Houston connection. However, in a 1999 internal memorandum, Jackson reported hearing the story of the lost Houston signature, but claimed the incident occurred before he joined the court in 1957. Some, including former Chief Justice Tom Phillips, attribute the story to former Chief Justice Joe Greenhill, who had reportedly seen the signature as a young law clerk around the beginning of World War II. However, this story cannot be true, as the flyleaf was already gone by then, as reported in newspapers in 1937.

Like the little Bible itself, the origins of the legend remain unclear. With no concrete evidence to prove a Houston provenance, the story may be a Texas-sized myth. It seems like early sources only connected the hero of San Jacinto to the court’s Bible through the logical possibility that it was once used to swear him into office. Nevertheless, the tale of Houston’s humble gift to the high court of his fledgling republic has endured.

We may never know for certain where the Bible came from, but the Supreme Court of Texas continues to proudly care for our most precious artifact, as it has for hundreds of years. The lore surrounding its origins only adds to the mystique.

Research and writing by Tiffany Gilman.