Chief Justice Nathan L. Hecht delivered his State of the Judiciary address Wednesday before a joint session of the Texas Legislature in the House of Representatives, calling for bail reform and money for continuing technological improvements for pretrial-release considerations, higher salaries for judges and non-partisan election of judges. He also urged reforms that protect people in guardianship,  juvenile-justice improvement and mental-health needs for criminal offenders.

The speech may be viewed archived at this link {speech starts at 2:10:25).Click here for the speech text. 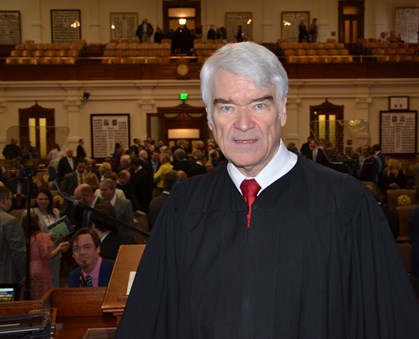 This state-of-the-judiciary address is Hecht’s third since he became chief justice in October 2013.

¶ Bail reform and criminal-justice pretrial technology needs. "It is time—actually, it’s past time—to ensure that defendants who pose no risk to the public are not jailed, and that those who do, are. I urge you to pass the Damon Allen Act," the chief justice said.

Telling of state Trooper Damon Allen's death, shot Thanksgiving Day 2017 near Fairfield by an offender who had been released on a $1,500 bond despite his assault on an officer after a high-speed chase, Hecht said bills in the Legislature would give judges more discretion to set bail and more information to guide that discretion rather than following a schedule focused on the nature of the crime they're charged with. Trooper Allen's widow, Kasey, was a featured guest.

"The Act does not eliminate cash bail; it gives judges more flexibility," Hecht said. "Let me be very clear: money bail has its place, but blindly following a one-size-fits-all schedule of offenses and amounts—setting $15,500 bail for Damon Allen’s shooter—is not informed decision-making. The Act broadens judges’ discretion. It would give judges setting bail more information, and most importantly, more reliable information about a defendant’s criminal history, previous offenses involving peace officers or family violence, and other risk factors."

But the need for technology in criminal-justice-system reform is broader, the chief justice said. "Twenty-five years ago, a third of the jail population was awaiting trial. Now the percentage is three-fourths. Most of those detained are non-violent, unlikely to re-offend, and posing no risk of flight. Many are held because they’re too poor to make bail. Though presumed innocent and no risk to public safety, they remain in jail, losing jobs and families, and emerge more likely to re-offend.  The toll on them personally also burdens communities. And on top of that, taxpayers must foot the bill—a staggering $1 billion per year to jail those who should be released. Besides the costs, detaining someone solely because he’s poor is against the law. It violates fundamental constitutional rights. In 21st-century Texas, it ought to be unthinkable." 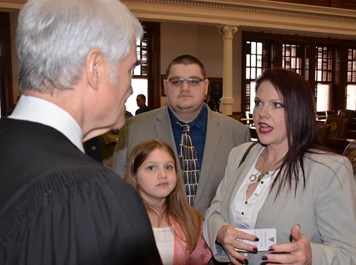 "So why does it happen? Because judges are denied a readily available tool to make more informed decisions. Historically, bail is set by a predetermined schedule based on one thing: the nature of the offense. Validated risk assessment computer programs, using a few pieces of demographic information, can predict with superior accuracy whether a defendant poses a risk of flight, violence, or recidivism. The program is called “validated” because it’s been tested and proven to work. One program, the Public Safety Assessment, is being used in Harris County and will soon be used in other Texas counties."

¶ Judicial selection. "No method of judicial selection is perfect. Federal judicial confirmation hearings are regarded as a national disgrace by senators themselves. States have tried every imaginable alternative. Still, partisan election is among the very worst methods of judicial selection. Voters understandably want accountability, and they should have it, but knowing almost nothing about judicial candidates, they end up throwing out very good judges who happen to be on the wrong side of races higher on the ballot. Merit selection followed by nonpartisan retention elections would be better. At a minimum, judicial qualifications should be raised, as the Judicial Council recommends. I urge you: at least, pass Senate Bill 561 and Senate Joint Resolution 35." [Photo: Chief Justice Hecht with Trooper Damon Allen's widow, Kasey]

¶ Judicial salaries."The people of Texas can be proud that when improvement in the justice system is needed, we’re working on it, hard. Texas has not compensated her judges fairly. Adjusting for inflation, Texas judges are paid less than they were in 1991, 28 years ago. Experienced judges are just not encouraged to stay.

"The Judicial Compensation Commission has recommended that judicial pay be increased 15 percent. House Bill 1 includes a 10 percent increase, which would be very helpful. But Senator Joan Huffman’s Senate Bill 387 proposes a different approach that encourages retention of judges. Its essential feature is that judges’ compensation will increase every four years they serve, up to 12 years—basically two terms for appellate judges and three for trial judges. The plan thus rewards experience and recognizes the value of continued service. Like most private-sector employees, judges who work hard and do well would make more over time. And raising beginning salaries remains an option. Senate Bill 387 is the best solution I have seen to the problems associated with increasing judicial compensation. I urge you to support it."

¶ .Fines and fees instead of jail. "Legislation passed last session on Judicial Council recommendations gives judges more discretion to determine what a defendant can pay and to offer a plan, require community service, or waive some or all of the fines or costs. The Council predicted that judges working with defendants would increase compliance and reduce jail time. It was right. Judges are issuing fewer warrants, imposing more community service, waiving fines and fees for the indigent, and jailing fewer. That alone has saved taxpayers at least $2.4 million."

"The laws passed last Session have benefited defendants and taxpayers alike. The Texas model is drawing national attention, and we’re working to improve it further.

"The Judicial Council recommends that court cost and filing fee structures be simplified to ensure that they are constitutionally applied and collections are directed to a legitimate purpose. Senators Judith Zaffirini and Joan Huffman have filed Senate Bill 346 to do just that. I urge its passage."

"Every day, children enter the juvenile delinquency system and child-protective services, often at the same time, but with different judges. The Judicial Council recommends that the same judge handle both cases. And the Supreme Court’s Children’s Commission proposes to train the judges and increase collaboration. I urge you to support these efforts with legislation and funding."

¶ Juvenile justice. "A 12-year-old who steals a car from a neighbor is adjudicated as a juvenile in the civil-justice system and faces no criminal penalty. Meanwhile, a 12-year-old who steals a $10 die-cast metal car from a general store is prosecuted in the criminal system for a Class C misdemeanor. It makes no sense. A child who breaks the law must certainly face the consequences, but the reason for the juvenile justice system is to keep children from being treated as criminals. The Judicial Council has worked with representatives of the justice and municipal courts, juvenile prosecutors, and defense attorneys to propose statutory changes that will continue to divert children from the criminal justice system while keeping them accountable for their actions. I urge you to consider them."

¶ Mental-health assessments."Legislation last Session increased mental health assessments at the jail. Rarely done before, more than 21,000 assessments were made last year. That’s progress. But the Judicial Council recommends changes in the civil-commitment process to facilitate care outside the criminal system. Senator Joan Huffman’s Senate Bill 362 contains the Council’s proposals, and I urge you to support passage."

¶ Protecting against guardianship abuse. Wards can be forgotten in guardianship proceedings, the chief justice said, citing cases found only by the Office of Court Administration’s Guardianship Compliance Program. "The Judicial Council recommends expanding the program to monitor guardianship cases in all Texas courts. And that’s what Senate Bill 31 will do, co-authored by Senators Judith Zaffirini, Eddie Lucio, Jane Nelson, Joan Huffman, Brian Birdwell, Brandon Creighton, Charles Perry, and Bryan Hughes. Representative John Smithee has filed its companion, House Bill 1286. The bills will call the program by its real name: the Guardianship Fraud, Abuse, and Exploitation Deterrence Program. I urge its passage."

The state constitution was built on mistrust of governmental power, Hecht said, so the constitution divided power among three branches intending them to be competitive.

"They succeeded. But in Texas, we have proved that the Branches, each in its own sphere, can work together for the people’s good. In my 38 years as a Texas judge, the relationship between the Branches has never been better than it is today," he said. "I speak for the Third Branch in saying we will do all we can to see that the relationship remains strong."