November 6, 2018
AS THE COUNTRY VOTED, A FORMER PRISONER OF WAR SPOKE
ABOUT FREEDOM IN EARLY VETERANS DAY OBSERVATION

A onetime Vietnam war prisoner who devoted much of his professional life to helping Texas veterans told an early Veterans Day observation Tuesday he learned the hard way that freedom’s not free. 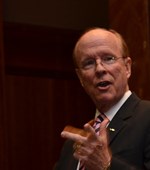 Ken Wallingford, who retired in August as acting executive secretary with the Texas Veterans Land Board, was an Army sergeant among a five-man advisory team to South Vietnam soldiers when his post was overrun by the Viet Cong and North Vietnamese army regulars in 1972. He spent 10 months in a 5-foot-by-6-foot bamboo “tiger cage” in a prison in Cambodia.

His capture in Loc Ninh, then South Vietnam, was in his second tour in Vietnam for which he volunteered. He was six days from coming home.

“You know the most important thing,” Wallingford said, “this was a small price I had to pay for what I have today.”

Wallingford’s appearance and the Veterans Day observation in the Courtroom was organized by the Texas Office of Court Administration.

Chief Justice Nathan L. Hecht introduced Wallingford, who noted Wallingford’s photo as a captive hangs in a small museum in the village where he and others among the U.S. advisors tried to hold back an onslaught by as many as 30,000 enemy troops. Wallingford and four other advisors were with about 200 South Vietnamese army regulars.

Wallingford suffered 17 shrapnel wounds during mortar and artillery fire on Loc Ninh in April 1972. He was awarded the Silver and Bronze stars, two Purple Hearts, the Prisoner of War medal and a South Vietnam commendation.

His release came in February 1973, one of the first two Texans held as prisoners who came home following the Paris Peace Agreement.