After 13 Years on the Court, Justice Phil Johnson Announces His Retirement

November 8, 2018
AFTER 13 YEARS ON THE COURT,
PHIL JOHNSON ANNOUNCES HIS RETIREMENT

“You feel like in this position you can make a difference. The law is the superstructure of society, the framework for doing what we can do,” he said. “I’ll miss that I was contributing. That’s what I’ll miss about it.” 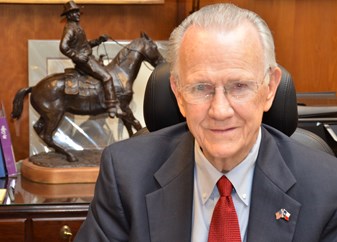 His term ends in December 2020. When his resignation is effective he will have served as a Texas judge for 20 years, 13 years on the Supreme Court and seven as a justice, then chief justice on the Amarillo Court of Appeals.

“He has made a vast and indelible contribution to Texas law,” Chief Justice Nathan L. Hecht said. “Justice Johnson is greatly beloved and admired by the Court and its staff, and we will miss his wise and steady leadership greatly.”

After service in Vietnam in 1967-68, during which he was awarded the Silver Star, Distinguished Flying Cross with bronze oak leaf cluster, the Air Medal with multiple oak-leaf clusters and the Republic of Viet Nam Cross of Gallantry, Johnson continued as an Air Force instructor until 1972 when he enrolled in the Texas Tech University School of Law.

He graduated in 1975 and joined the Crenshaw Dupree & Milam law firm in Lubbock. He was a partner there when he was elected to the Amarillo Court of Appeals in 1998. He is board-certified in personal-injury and civil-trial law and is a member of the American Law Institute.

Reared in Lubbock, Johnson earned his bachelor’s degree in mathematics at Texas Tech, then joined the Air Force.

“It’s hard to believe that everything I left I missed,” he said. “I would not see finishing a career any better.”