Former Justice Eugene A. Cook III, called the father of legal professionalism in Texas, has died after a long illness. He was 82.

Cook served on the Texas Supreme Court from September 1988 until the end of 1992. 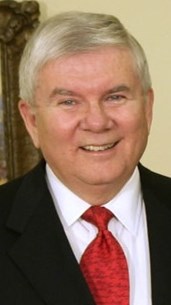 As chair of the Supreme Court’s Committee on Professionalism, created at his urging in 1989, he led drafting of the Texas Lawyer’s Creed. Both the Supreme Court and Texas Court of Criminal Appeals adopted the creed in November 1989, making Texas the first state to adopt such principles to govern its lawyers’ conduct.

“Lawyer bashing is a national pastime … ,” Cook wrote for the 20th anniversary of the creed’s adoption. “Despite these insults, I am proud to be a lawyer. I know what many members of the public apparently do not — that history is filled with generations of lawyers who, like those that Shakespeare’s Dick the Butcher would kill, have stood against tyranny to build a free society.

In 2011 the Freedoms Foundation of Valley Forge, Pennsylvania, awarded Cook the George Washington Honor Medal. And in 2018 the Houston Bar Association established the Justice Eugene A. Cook Professionalism Award and named Justice Cook its first recipient in 2019.

“While Justice Cook served as a member of the Supreme Court only a little over four years, he made a lasting contribution to the legal profession in Texas with his authorship and advocacy of the Texas Lawyer’s Creed,” Chief Justice Nathan L. Hecht said. “The Creed was autobiographical in that it described Gene as a lawyer and justice.”

After law school he joined Houston’s Butler & Binion firm in 1966, focusing on civil litigation and family law. In 1985 he formed his own firm, Cook Davis & McFall, where he served as managing partner.

Then-Governor Bill Clements appointed Cook to the Texas Supreme Court in August 1988. He won statewide election on November 8 of that year but was defeated in 1992 by Rose Spector, the first woman elected to the Court. He returned to Houston as senior partner at what was then Bracewell & Patterson and led its appellate practice group. He retired from Bracewell in 2002.

“His contributions to professional ethics and integrity have improved the delivery of legal services in this state for a generation and their impact will be felt for generations to come.”

Houston lawyer Warren Harris, one of Justice Cook’s first law clerks, remembers Cook’s pride in being a lawyer. “And he sincerely meant it,” Harris said. “He worked his entire career to bolster the public’s perception of the legal profession. Justice Cook also enjoyed mentoring young lawyers, and he was always willing to give advice and help young lawyers in any way he could.”

Gene Cook married Sondra Attaway in 1968. Survivors include his wife and two children.

He died Sunday in Richmond, Texas. A memorial service will be planned next year, Harris said.

The Texas Lawyer’s Creed, a mandate for professional conduct, begins: “I am licensed by the Supreme Court of Texas. I must therefore abide by the Texas Disciplinary Rules of Professional Conduct, but I know that professionalism requires more than merely avoiding the violation of laws and rules. I am committed to this creed for no other reason than it is right.”

“It is true that we can’t, standing alone, change the world,” Cook once said. “We can however make the world a better place. Success doesn’t mean having the largest home or fanciest automobile. Success is measured by many intangible facets of our lives. Learn to laugh often, earn the respect of others, and find beauty in a bluebird or cardinal sitting in a tree. If the path for one human being has been made easier, then you are a success.”