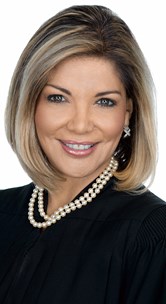 In the podcast, Justice Guzman will join state supreme court Justice Rhonda Wood of Arkansas, Chief Justice Bridget McCormack of Michigan and Justice Beth Walker of West Virginia to discuss the law and its real-world implications.

The Lady Justice podcast will focus on our nation’s state courts where more than 90% of cases are heard. State supreme courts often serve as the final arbiters in appeals of those cases.

Justice Guzman describes the podcast as “an exciting opportunity to enhance the public’s understanding about the law in an way that is accessible, informative, and engaging.” Justice Sandra Day O’Connor, the first woman to serve on the U.S. Supreme Court, made civics education her enduring legacy, and the Lady Justice podcasters are proud to contribute to her mission of educating, encouraging, and inspiring on matters of import to the public and practicing lawyers.

“Trust and confidence in the courts depends on a broader public awareness of the justice system and how it affects all our lives,” Texas Chief Justice Nathan L. Hecht said. “This podcast provides unique insights into the system as seen through the eyes of four national leaders on state supreme courts.”

In the first episode, which premieres on Constitution Day, September 17, the justices discuss state constitutions and how they differ from each other and the U.S. Constitution.

Residents of the United States all live under the federal constitution, but states also have their own constitutions that govern the daily lives of their citizens. These written charters can vary significantly from state to state. Some were adopted more than a century ago while others are only a few decades old. In some states, citizens are granted the power to amend or revise the state constitution while in other states that is not possible.

“As each justice discusses the characteristics of her state’s own constitution, we learn about these differences,” said Justice Wood, who leads the discussion.

The next episode will explore each justice’s journey to her state supreme court and personal experiences in law and on the bench. “Only 5% of U.S. attorneys are Hispanic and about 2% are Latina, so my perspective is borne of the unique experiences of an underrepresented group of professionals,” Justice Guzman said.

The podcast is available on iTunes, Spotify, Stitcher, and in other podcasting apps. It can also be found at: https://ladyjustice.podbean.com/. Trailers for the inaugural episode are available now for public access.