Tom Reavley, who served for nine years on the Texas Supreme Court before President Carter appointed him to what would become a 41-year career on the Fifth Circuit U.S. Court of Appeals, died Tuesday in Houston. He was 99.

When he died he was the oldest active federal judge. During his federal judicial tenure he decided cases as a visiting judge on every U.S. court of appeals but one. His legal career spanned more than six decades.

As a lay Methodist minister and Sunday School teacher, his moral bearing earned him the sobriquet “Pope ofhe Fifth Circuit.”

Chief Justice Nathan L. Hecht said: “Sailor, scholar, lawyer, advisor to governors and presidents, judge, writer – Tom Reavley was all these things, and always with unfailing wisdom, humility, civility, decency, kindness to all and good humor. He was a towering figure in Texas and a true champion of justice for the state and the country."

One among legions of his former law clerks, legal lexicologist and law professor Bryan A. Garner said Reavley should be remembered “in the tradition of the greatest American judges”: “Fair-minded, understanding, empathetic, forgiving of people’s foibles, common sensical, impatient with mean-spiritedness and altogether wise and humane.” 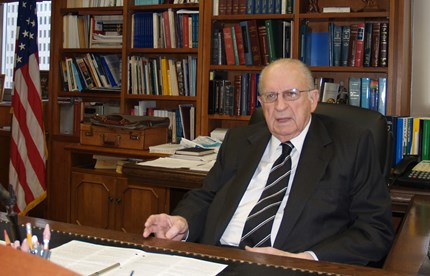 His onetime colleague Robert Parker, a former Fifth Circuit judge from Tyler, said Reavley will be remembered for a total dedication to the rule of law. “On the trial court, the state Supreme Court and the federal court of appeals his decisions were never calculated on the basis of following some political agenda,” Parker said. “He tried to understand the law that applied to circumstances of the dispute before him, then steadfastly followed the law. That’s the mark of a great judge.”

Services are pending in Houston. Judge Reavley was married for 60 years to Florence Wilson Reavley, who died in 2003. In 2004 he married Judge Carolyn Dineen King, also of the Fifth Circuit, also a Carter appointment in 1979. They appeared on the same day before the Senate Judiciary Committee and were the only married couple among Article III appellate judges.

Judge Reavley and Judge King recalled that his late wife, before she died, told them to marry.

Thomas Morrow Reavley was born June 21, 1921, in Quitman and was reared in Nacogdoches, where his parents had a general store and a café. He earned his bachelor’s degree from the University of Texas at Austin in 1942, then enlisted in the U.S. Navy. He served in both the Pacific and European theaters. After his discharge in 1946 he earned his law degree from Harvard in 1948, then served as an assistant district attorney in Dallas for two years. He then returned to Nacogdoches, where he was in private practice before his election as Nacogdoches County attorney.

In 1955 Gov. Allan Shivers chose Reavley to be secretary of state. When his two-year appointment expired, he returned to private practice in Jasper and Austin. In 1962 he ran unsuccessfully for Texas attorney general. In 1964 Gov. John Connally appointed him to the 167th District Court in Travis County.

In 1960, as a volunteer for then-Sen. John F. Kennedy’s presidential campaign, he suggested to campaign officials that Kennedy confront the “Catholicism issue” by speaking to Protestant ministers at the Houston Ministerial Association.

In October 1968 Connally appointed him to the Texas Supreme Court just before his election that November. He returned to private practice in Austin in 1977 and in 1978 was appointed a special judge on Texas Court of Criminal Appeals, making him one of few judges who served on both of Texas’s high courts.

In 1979 President Carter nominated him to the Fifth Circuit. He took senior status in 1990 but maintained a mostly full caseload for years before 2019. In 1983 he earned a master’s degree in judicial studies the University of Virginia law school. Four universities in Texas and California awarded him honorary doctoral degrees.

Off the bench, Judge Reavley was a prolific writer and served on the adjunct faculty of the University of Texas School of Law and lectured at Baylor, Pepperdine and Texas Tech law schools. With 11 other judges and Garner, he was coauthor of a highly regarded The Law of Judicial Precedent, published in 2016. In 2016 Baylor Law Review dedicated a volume to Judge Reavley in recognition of his contributions to Texas and to American law.

“He showed what a difference an intelligent man can make in society,” said the late Austin lawyer William Hilgers, a longtime friend. “His work as a judge went to the highest expectations I could imagine for a judge’s conduct.”

“But beyond all that, he taught us the importance of truly respecting your colleagues even when you disagree with them, of avoiding the pettiness that sometimes finds footing within the bench and the bar, and of knowing the names of – and genuinely caring about – every deputy clerk, doorman and waitress at the places you frequent. He was the first judge I ever really knew, and the only one I’ve ever wanted to be exactly like.”