The Second District Court of Appeals has appellate jurisdiction over appeals arising from district and county courts in 12 counties: Archer, Clay, Cooke, Denton, Hood, Jack, Montague, Parker, Tarrant, Wichita, Wise and Young. See Tex. Gov't. Code Ann. § 22.201 (Vernon 1988). These cases will include all types of civil appeals and all types of criminal appeals, except where the death penalty has been imposed. Death penalty cases are appealed directly to the Texas Court of Criminal Appeals in Austin. The Court also has jurisdiction over original proceedings from those same counties, such as Writs of Mandamus, Injunction, Prohibition and Habeas Corpus.

Originally, the Court was one of a handful of appellate courts created by the Texas Legislature in 1891 to help handle the increasing case load of the court system. Texas voters had to approve a change in the state constitution to allow the creation of three intermediate appellate courts: Galveston, Fort Worth and Austin. See Tex. Const. art. V § 6 (amended 1978, 1980, 1985. Original text found in Resolutions, 22nd Leg., S.J.R. No. 16, 1891.). The Galveston Court was numbered as "1", Fort Worth as "2" and Austin as "3." At that time, the three judges of the Fort Worth Court heard civil appeals from 118 counties, covering approximately the northern two-thirds of the state, from the Sabine river and the Louisiana border west to the New Mexico line. Over the years as the state's population has grown, more appellate courts were created and the court's physical area of jurisdiction changed dramatically. Today, there are fourteen Courts of Appeals. Since 1981 these intermediate appellate courts have handled criminal appeals as well as civil appeals. See Tex. Const. art. V § 6 (amended 1985).

The Court was initially housed on the second floor of the Powell Building on Main Street between 1st and 2nd Streets in Fort Worth. The detailed description of the furnishings from a period newspaper article includes the facts that the floors were covered with cocoa matting, and each room was provided with a fireplace, electric lights and steam heat. The judges' chambers included "cabinet desks, easy chairs upholstered in leather, folding beds, ordinary chairs, desk chairs, washstands, etc." The Fort Worth Gazette, October 3, 1892, p. 8. The original members of the Court were: Chief Justice B.D. Tarlton, Associate Justice H. O. Head, and Associate Justice J. W. Stephens. W. L. Huff was the Clerk of the Court and B. W. McDonald was the official stenographer. The Fort Worth Gazette October 4, 1892, p. 2. When the present Tarrant County Courthouse was completed in 1895, the Court was the first tenant to move in on July 1, 1895. See Tarrant County Commissioners' Court Minute Book 11, p. 11.

The First Days of the Second Court of Appeals 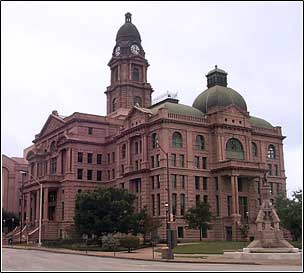 "Be it remembered that on this the third day of October A.D. 1892, at 10 O'Clock A.M. the Court of Civil Appeals for the Second Supreme Judicial District of the State of Texas met in the City of Fort Worth in the County Tarrant in accordance with General Laws of the State of Texas passed at the first Called Session of the 22nd Legislature. Present Hon. B.D. Tarlton, Chief Justice; Hon. H.O. Head and Hon. I.W. Stephens, Associate Justices, W.L. Huff, Clerk."

The basic duties of an appellate court justice have not changed greatly since the opening days of the Court, although the same cannot be said of their surrounding circumstances. The justices of the 2nd Court assumed their duties in 1892 in a world far removed from the cyberage of 2000. The 1892 population of Fort Worth was only 31,000; Dallas could only boast of 38,000 in 1890, while New York reported over 2.5 million. The nation's population in 1890 was estimated at 63 million persons. The National Debt was a mere $890 million dollars, and the per capita wealth was estimated at $1,035.57. Benjamin Harrison was president, but was unseated by Grover Cleveland as economic hard times were sweeping the country amid public outcry over new tariffs.

Fort Worth also suffered during that financial depression, yet many new businesses were chartered as mills, railroads and the beginnings of the meat packing industry began moving into Fort Worth. Despite the hard financial times, art and education were not forgotten. 1892 was the year that plans were laid in meetings held in homes for a Fort Worth Art Museum and Andrew Carnegie was petitioned to supply the first funds for a Public Library in Fort Worth. The American flag had fewer stars on it in 1892; Idaho and Wyoming were new states, bringing the total to 44. Women were admitted to practice as attorneys before the U.S. Courts in 1879, but would not be granted the right to vote for another 28 years.

There were no airplanes or automobiles yet, it would be another 10 years before wireless messages would be sent across the Atlantic Ocean. The phonograph was only 15 years old, and electric lights 14 years old. Only 10 years had passed since the bacillus for Tuberculosis had been isolated, 5 since Pasteur had found a cure for rabies. Color photography was invented in 1892, and the first motor driven vacuum cleaner. Newspapers had only recently been full of the news of Dr. Livingston and the great unknown jungles, rivers, and lakes that Stanley brought back from Africa in 1890. The United States' Indian wars with the Nez Percé, Apache and Sioux tribes were still fresh on everyone's minds; Sioux Medicine Man Sitting Bull had been killed just 2 years ago. In England, Queen Victoria had celebrated her Jubilee in 1887, and would celebrate her Diamond Jubilee in 1897. Gladstone was Prime Minister—again. In Russia, terrible famines swept the country from 1890 - 1892. In 1894, Nicholas II would become the last Czar of Russia.

The Second Court of Appeals began its sessions in October, 1892, before the present Tarrant County Courthouse was built. The Court's original quarters occupied nine rooms on the second floor of the Powell Building, on Main Street and Second in Fort Worth. The Fort Worth Gazette of October 3, 1892, describes the quarters in some detail:

Westward of this is the court room, about 40x20. Next the western wall is a platform on which is the desk of the judges, a beautiful piece of work made by Lowe, here in Fort Worth, and of a finish that would do credit to any cabinet maker in the country. It is so solid and massive it looks as if it would last for centuries, and yet it is of good design, in no sense cumbersome looking.

In front of the Judge's stand will be the bar; tables giving ample room for the books and papers to be used in arguing the cases.

Northward of this room and extending eastward are the library rooms, with shelving to a convenient height extending around the sides of the rooms. There are 135 feet of sets of book shelves, with room for thousands of books. Five cases of books for the library are already unpacked and the books on the shelves, a set of great value, being a digest of the statutes of all the states in the union. The shelving is of native pine with oil finish and is the work of Maxwell, and a very neat job he has made of it. All these rooms are covered with cocoa matting.

Across the corridor are the three private rooms of the judges, Tarlton, Head and Stephens. These look out on Main street and are uniform in size, in convenience and in furnishing.

All the furniture of the court is antique oak, and that of the judges' rooms is of the same style. Each room is provided with cabinet desks, easy chairs upholstered in leather, folding beds, ordinary chairs, desk chairs, washstands, etc. The carpets are very heavy and of good pattern. Each room is provided with a fireplace and all are steam heated.

The lighting of the entire court is to be by electric light, though gas is provided in all the rooms, for use in an emergency.

The arrangement of the court rooms is very good, and the committee in charge of the work has well discharged the by no means easy task imposed upon it.

Thanks to the reduced territory of today's 2nd Court, and to improved roads and the automobile, present day court members are no longer required to sleep at the court house but may return to their families at night. Fireplaces have been replaced by central heat and air. The libraries of the Court have many more books today than in 1892, although the space legal materials require is being reduced dramatically as books are released on CD ROM discs. 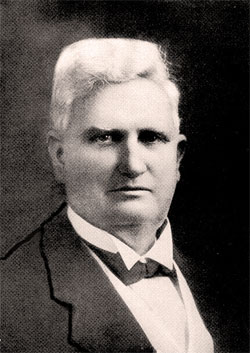 The first Chief Justice of the 2nd Court of Appeals was Judge B. D. Tarlton of Hillsboro. He was born in 1849 in St. Mary's Parish, Louisiana and moved to Texas in the late 1870s. Educated at St. Charles College and Tulane University, receiving his LL.B. in 1872. He practiced law in Hillsboro and Waxahachie and served in the Texas Legislature for two sessions, serving as chairman of House Judiciary Committee No. 2 in the 19th Legislature. In 1891 Governor Hogg appointed him as a Justice of the Court of Commission of Appeals. When the 2nd Court was created, he became its first Chief Justice.

After leaving the Court, he resumed his practice of law in Fort Worth. He moved to Austin in 1904 to work as a member of the law faculty of the University of Texas, a position he held until his death in 1918. Subsequently, the Law School named its library in his honor. 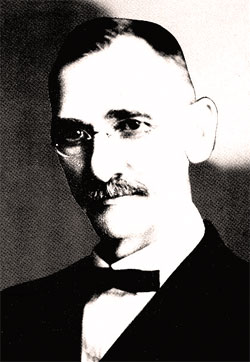 Isaac Weatherstone Stephens was born in Bledsoe County, Tennessee in 1850. He received his A.B. degree from Washington & Lee in 1872, winning the debater's medal that year of the Washington Literary Society. He taught school while he continued his study of law. In 1874 he first practiced law in Weatherford, Texas. He served as Parker County Attorney for several years before returning to private practice. He was appointed by Governor Hogg to serve as one of the 2nd Court's first three judges.

He served the Court until he resigned from the bench in 1908. At that time, he returned to private practice, working in Fort Worth as an attorney until he retired in 1930. Justice Stephens was 94 years old when he died at his home in Fort Worth in 1945. 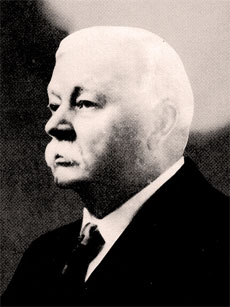 Justice Henry Oswald Head was born in Sumner County Tennessee on March 17, 1851. His 1871 law degree was from Cumberland University. He soon moved to Sherman, Texas and opened a law practice in the offices of Joseph Bledsoe and Silas Hare. From 1886 to 1889 he served as Judge of the 15th District Court, covering Grayson and Collin Counties. He was appointed by Governor Hogg as the third member of the 2nd Court's original trio of justices.

After serving the appellate court for three years, Justice Head returned to Sherman and resumed his private practice of law, eventually forming the firm of Head, Dillard, Maxey, Freeman, McReynolds and Hay. Justice Head died at his home in Sherman April 24, 1929. He was famous for his excellent memory and his ability to refer accurately to relevant cases without notes. The memorial to Justice Head in the Texas Law Review, states:

But beyond any accomplishments of Judge Head as a lawyer or a judge,—great as those were—his higher excellence was as a man. He was quick to see the right of any issue, prompt in aligning himself with that right and tenacious in holding to it. Quiet and modest and not self-assertive, he was courageous in the expression of his views and firm in abiding by them. He was a true friend and loyal citizen, taking an active part in everything that tended to advance the good and prosperity of his fellow citizen, his city, his county and his State.

Historical Listing of Justices Through 2010