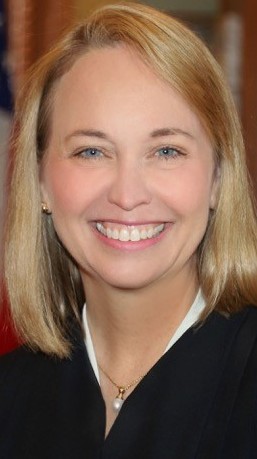 Justice Jane Bland has served on the Supreme Court of Texas since 2019. Before that, she served for six years as a state district judge in Houston and 15 years as a justice on the First Court of Appeals.

She earned her undergraduate and law degrees from the University of Texas. In law school, she was Vice-Chancellor, an editor of the Texas Law Review, and a member of the Order of the Coif. Following law school, Justice Bland clerked for the Honorable Thomas Gibbs Gee on the United States Court of Appeals for the Fifth Circuit.

Justice Bland is board-certified in civil appellate law and civil trial law. She began her practice at Baker Botts, where she handled trial and appellate matters. Before her appointment to the Court, she was a partner at Vinson & Elkins in Houston. She is a member of the American Law Institute.

Throughout her career, Justice Bland has been recognized for her work to improve our state’s judiciary. In 2010, Chief Justice John Roberts presented her with the William H. Rehnquist Award, given to a state court judge who exemplifies the highest level of judicial excellence, integrity, fairness, and professional ethics. The Texas Association of Civil Trial and Appellate Specialists has recognized her as the judge of the year four times. She has received several President’s Awards for her work with the Houston Bar Association and the Houston Young Lawyers Association.

Justice Bland previously chaired the board of Houston Volunteer Lawyers and the Oversight Committee for the Texas Pattern Jury Charges. She served on the Court’s Commission to Expand Civil Legal Services and the Board of Legal Specialization’s Civil Appellate Law Advisory Commission. She is a senior trustee of the UT Law School Foundation.

Justice Bland and her husband, Doug, have two children.